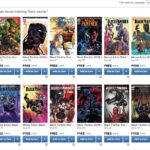 Chadwick Boseman, who played the lead character in the Marvel film Black Panther passed away recently of colon cancer. He was only 43. The actor's untimely death has brought a new focus on the Black Panther universe. Black Panther first appeared in the Fantastic Four in 1966. The character was created by the late Stan Lee. If you'd like to read the original comics … END_OF_DOCUMENT_TOKEN_TO_BE_REPLACED

In the current economic climate we’re all looking for ways to keep ourselves entertained without breaking the bank.

This site highlights free or good value options online and in Ireland.